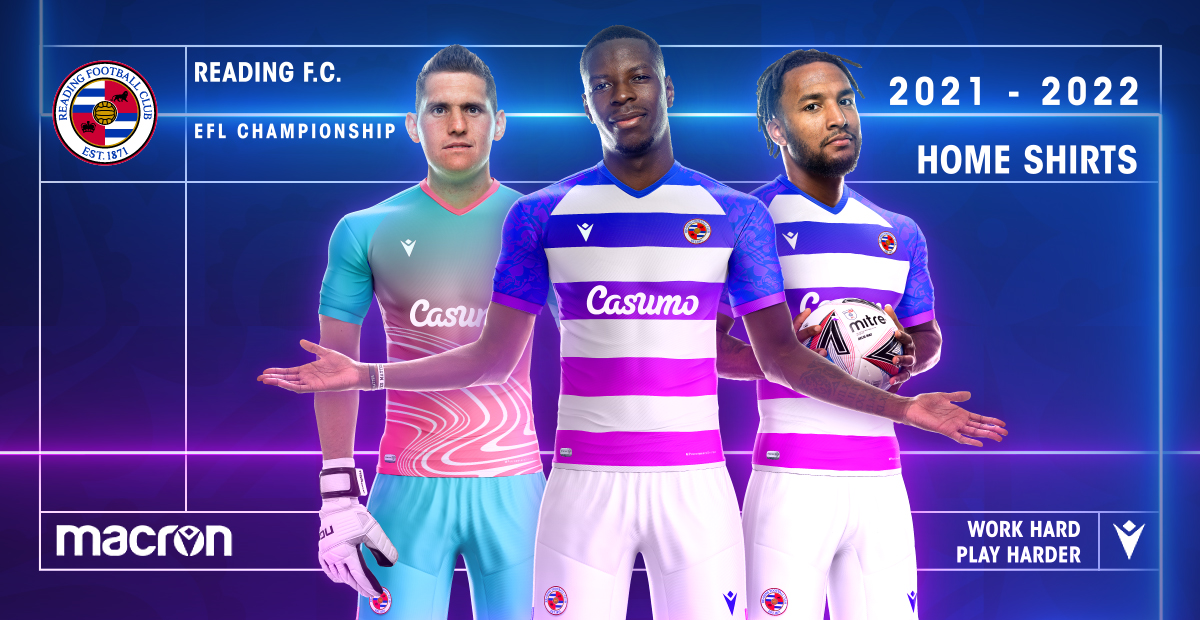 In the past we’ve convinced the World’s greatest Darts players that they might have to ride a Horse up to the Oche, or Football players that they will need to douse themselves in tuna-fish infused water to act as a defender repellent.

But today, (April 1st 2021), it was the turn of Reading FC fans to be pranked. When Casumo Sports came to us at the start of 2021 with a concept that they wanted to produce a fake kit launch for April Fool’s day we were 100% on-board!

This coming season will be Reading FC’s 150th year, a momentous year for the club, a club that has donned a Blue and White kit in some capacity for it’s entire existence – So obviously a good way to wind-up loyal fans… add some random colours to their Blue and White masterpiece!

We set about designing a Home kit that stayed true to the Reading FC heritage at the top of the shirt, but as your eye wandered down to the waistline we slowly changed the Royals prominent blue into a rich and vibrant fuchsia colour. – Something that in all honesty looked great, but we knew would divide opinion amongst loyal fans!

We then produced a killer Kit launch video that we scripted and set in a futuristic neon lit studio. The kit is reveal bit by bit alongside an epic voiceover that explained that after “150 years of Blue and White hoops it was time for change..” – But why is it time for change we heard the fans cry in our minds-eye, and that was precisely the question we wanted them to ask, in fact alongside Casumo we decided that any interaction, be it positive vibes for the new kit, or shock horror that the classic Blue and White hoops had been muddied with another colour, it was all good publicity for Casumo and it was all done in good fun in the spirit of April Fool’s day.

So, after meticulously designing the new kit, paying great detail to all of the finer elements such as inside shirt labels, stitching patterns, kit makers logos etc, producing a stunning kit video, and a whole host of supporting imagery, it was finally April 1st and time for the prank to be released into the wild.. and people had very mixed reactions!

Some people that LOVED the new kit..

Some people that we not so keen on the new kit…

and some people that realised it was an April Fool’s joke pretty quickly!

Finally Casumo put Reading FC fans out of their delight/misery and announced that it was actually an April Fool’s prank, but during this 3 hours of fun from 9am-12pm, we managed to get the content seen by over 25,000 people, and had over 5,000 engagements, and it still climbs further still now. Which was ultimately the purpose of the campaign.

Without doubt this has been one of our favourite projects to date, we loved being given the creative freedom to design both the fictional Home Kits for Reading FC, and we really enjoyed producing a kick-ass kit launch video.

We hope you liked the campaign, and the kit designs! We’re hearing rumours that the Goal Keeper kit is particularly loved.. maybe a Special Addition kit of the future?